Paws Up For Pets Featured on Edhat 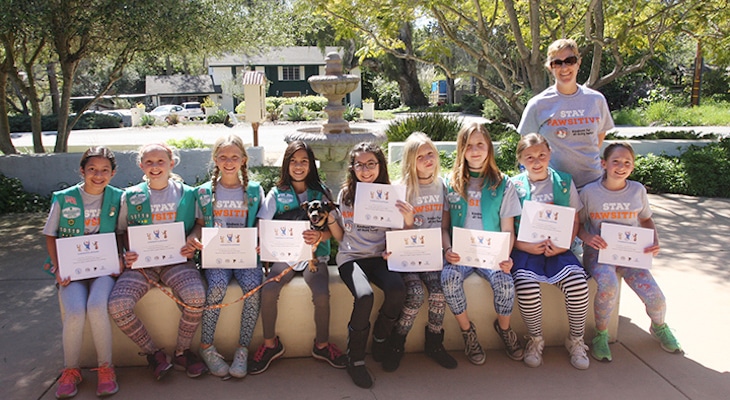 As of June 1, C.A.R.E.4Paws has graduated 150 young and excited Animal Ambassadors in Santa Barbara County through Paws Up for Pets, a new educational initiative that promotes accountability and compassion for animals and empathy in the community as a whole. A collaboration between C.A.R.E.4Paws, United Boys & Girls Clubs, Davey’s Voice and, as of June, the Rotary Club of Santa Barbara Sunrise, Paws Up for Pets was launched in October and focuses mainly on children age K-8 enrolled in afterschool programs. The 150 students who have graduated “Badge 1” include youth from United Boys & Girls Clubs’ Carpinteria and Lompoc units, the Chumash Reservation and a Girl Scout troop in Goleta. C.A.R.E.4Paws also works with Santa Maria’s Arellanes Junior High and just expanded its program to include the Lompoc YMCA, United Boys & Girls Clubs’ Goleta and Westside units, and a Santa Maria Girl Scout troop.

The youth who graduated with the Animal Ambassador badge worked weekly with C.A.R.E.4Paws for several months, learning about topics such as responsible pet care, pet overpopulation, shelter animals, and the importance of showing kindness to all living beings. “Paws Up for Pets is unique in that it engages children over a period of time, which allows us to get to know the kids and talk a lot about how to be a great pet-care taker, that animals have feelings, just like us, and what to do when a pet is lost, sick or abused,” says Carlos Abitia, C.A.R.E.4Paws’ Community Outreach & Youth Program Director.

Following the Animal Ambassador award, children have the opportunity to earn more badges. For example, the Animal Advocate badge involves a tour of a local shelter followed by a creative project. Students can choose to virtually adopt and write about a shelter pet. Or they can focus on the topic of how all pets are individuals and that all shelter animals have their own unique story. At the United Boys & Girls Club Carpinteria Unit, students are now working on their shelter projects, after visiting Animal Shelter Assistance Program (A.S.A.P.), Bunnies Urgently Needing Shelter (B.U.N.S.) and County Animal Services’ dog shelter in Santa Barbara. The Goleta Girl Scout troop also visited these three shelters. Afterward, they made high-quality leashes and toys for shelter pets out of recycled materials (like Girl Scout cookie boxes), and fundraised to buy blankets, pet treats and other supplies for the shelter as well as C.A.R.E.4Paws.

“As a Girl Scout leader, animal lover and pet owner, I have nothing but praise for Paws Up for Pets,” says head of the troop, Amy Findlay. “My troop learned about all aspects of pet ownership, from compassion to neglect and everything in between, and I guarantee they will be better pet owners as a result. They also learned that even as 10- or 11-year-olds, they can still make a difference in a pet’s life by educating others, volunteering, setting a good example and, essentially, being ambassadors for animals.”

Paws Up for Pets was created in response to several incidents of severe animal cruelty in Santa Barbara County and a general concern that few cruelty cases are reported, despite the strong connection between animal abuse and family violence. Years of research links animal abuse to violent behavior toward humans and shows that children who mistreat animals are more likely to act violently later in life. And, according to data collected from WestEd surveys and the California Department of Education, Santa Barbara County has a high rate of bullying—one third of public school students here have reported being bullied.  “When you show children how to be respectful and kind to animals, the ripple effects are endless,” says Abitia. “Children feel empowered, and are less likely to harm a pet, hurt a friend or bully a classmate. And they bring these values into adulthood.”

Poverty affects the welfare of our youth and our pets, too. In high-poverty areas, such as Lompoc and Santa Maria, more than 30 percent of adults and 40 percent of children live at or below the poverty line. And as many as 65 percent of these households own pets, according to a 2015-2016 National Pet Owners Survey. The good news? Paws Up for Pets connects pet-owning families to free and low-cost services that improve quality of life for them and their animals, such as spays/neuters, vaccines, vet care, and pet food through C.A.R.E.4Paws.

In addition to C.A.R.E.4Paws’ original Paws Up collaborators—United Boys & Girls Clubs of Santa Barbara County and Davey’s Voice—the Rotary Club of Santa Barbara Sunrise just joined as a partner with a $1,500 grant to support Paws Up workbooks, badges, certificates and “Stay Pawsitive” T-shirts for at least 50 children participating in the program. “The Rotary Club of Santa Barbara Sunrise, made up of local business, professional and civic leaders, has a history of supporting impactful community service programs that make a positive difference in the lives of youth, says President Chris Baxter. “Sunrise Rotary is thrilled to support C.A.R.E.4Paws’ new, innovative Paws Up for Pets program, which teaches compassion for animals and anti-bullying.”

To support Paws Up for Pets or for more information about the program and its generous sponsors, please visit care4paws.org/youthprograms, call 805.968.CARE (2273) or email info@care4paws.org.