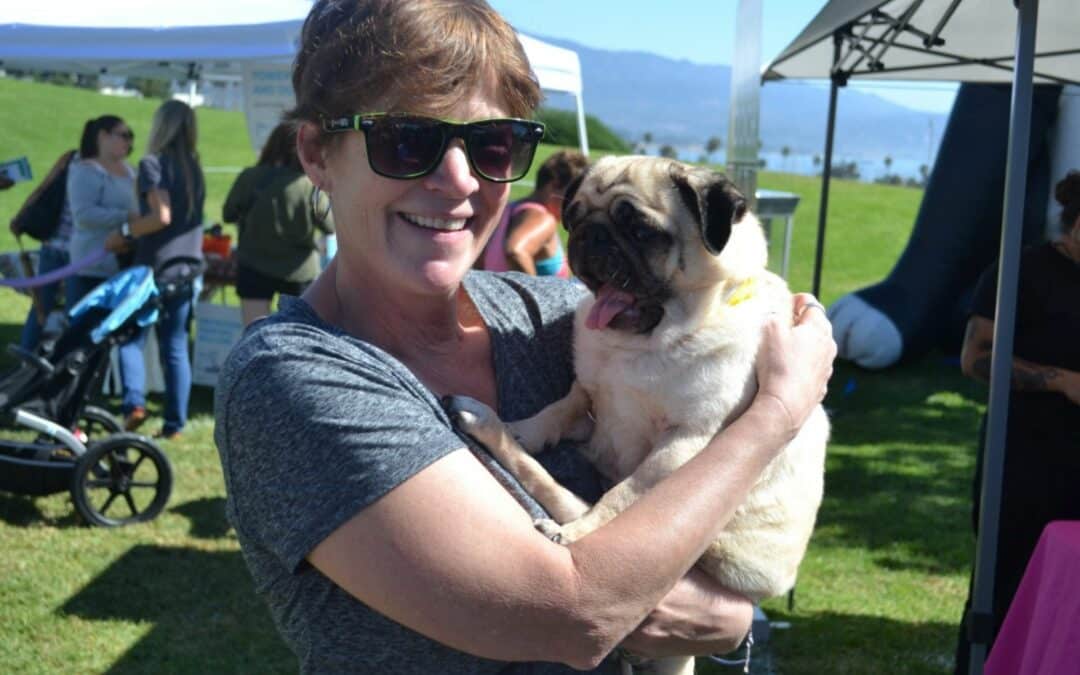 Of course, it also went to the cats and even bunnies as the nonprofit C.A.R.E.4Paws held its annual Wags n’ Whiskers pet adoption festival.

The free event featured more than 20 shelters and rescue organizations, as well as pet supply stores and other animal-related businesses and sponsors. On a sweltering autumn day, the festival drew an estimated 1,000 visitors.

“The goal was to create a network where all the local rescues, shelters and animal groups, as well as pet service providers, will be working to reduce pet overpopulation and keeping animals out of shelters,” Isabelle Gullo, founder of C.A.R.E.4Paws, told Noozhawk.

The event provides an opportunity to share the work of the different local animal welfare groups and showcase their adoptable animals outside of the typical shelter environment.

Pug Nation Rescue of Los Angeles was set up with pugs and other dogs for adoption. GiGi, one of the organization’s pugs, lost the use of her back legs after being spayed by a veterinarian. Her last owner had to give her up for adoption.

“I tend to adopt the older kind of unwanted dogs because I feel like I can offer them a really good home,” said Cate Lyon, who traveled from Walla Walla, Wash., to adopt.

“And I think a lot of times when you see the puppies and younger dogs up for adoption, I’m like, ‘Oh, they’ll get adopted really quick, they don’t need me.’”

Gesturing to GiGi, she added, “These guys need me.”

Gullo said Wags n’ Whiskers was not limited to adoptions.

“The overall goal really is to create awareness about what we’re doing here as a whole in the animal community, to help pets in need and pet owners in need,” she said. “It’s not just about the dogs, cats and bunnies that need homes, but it’s really about preventing unwanted litters of kittens and puppies and bunnies.

“And ensuring that we have programs in place that keep pets in their homes, and so if we approach it from those two angles, we’re going to have a drastically reduced shelter population.”

“We were obviously trying to promote adoptions and we adopted out a lot of animals, but we would adopt out three and six would come in to take their place,” she recalled.

“A few of us had this idea of wanting to actually prevent them from ending up homeless in the first place. We looked at all the reasons why pets end up homeless and we created programs to tackle those issues. And that’s when C.A.R.E.4Paws was born. That was 2009.”

The county animal shelter in Santa Barbara was caring for about 120 dogs a day in 2006. Today, it houses about 20 dogs.

The C.A.R.E.4Paws festival has adopted out an average of 30 to 40 pets each year, Gullo said. This year, there were 27 adoptions, with additional adoption applications pending.

This year’s festival included contests and performances, as well as an inaugural Best in Show competition, which involved a fashion contest, a talent contest and a lineup of rescues on the runway — promoting the idea of adoptable pets from the stage.