Paws Up For Pets Featured in the Santa Ynez Valley News 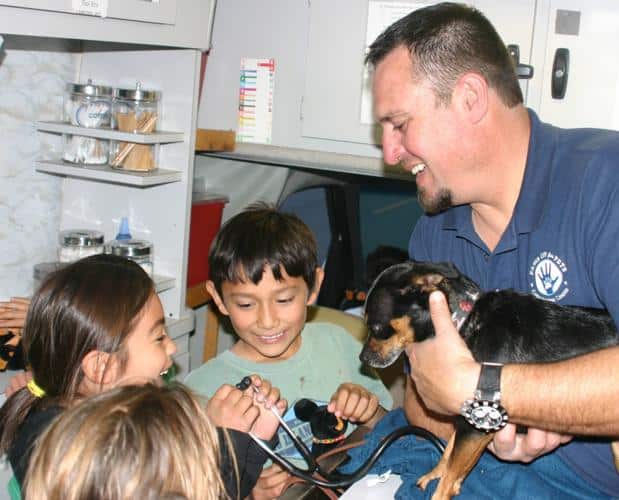 The sound of children talking, yelling, squealing and laughing poured from the white van as it rocked on its axles in front of Jonata School.

Through the rear door, next to a license plate reading “DVM 2U” and below a round C.A.R.E.4Paws logo, half a dozen children were clamoring to pet a small black-and-brown dog.

Surrounded by the crowd, Carlos Abitia stood near the cab, patiently telling the children about the calm but wary dog nestled in his arms as they reached out to stroke its head.

Closer to the rear door, three or four other children jockeyed to become the next one to climb up into a small cage to get an idea of what it’s like for dogs that are in a cage.

Meanwhile, in a school classroom, Isabelle Gullo cradled another small black dog as she told a dozen children seated around a table about Puppy Davey, as they each held black-and-brown Beanie puppies named Davey.

Gullo and Avitia, the co-founders of C.A.R.E.4Paws, were presenting a program designed to foster compassion and empathy for animals called Paws Up for Pets, to children of the Buellton Unit of the Boys & Girls Club of Santa Barbara County.

“Paws Up for Pets was inspired, in part, by some incidents of severe animal abuse in Santa Barbara County, including what happened to Puppy Davey,” said Gullo, executive director of C.A.R.E.4Paws.

“But beyond animal welfare, it’s about kindness for all living beings,” she added. “We hope they will promote animal welfare and, in return, take those values into adulthood. That’s how we change things.”

While C.A.R.E.4Paws has presented short, one-day programs promoting animal welfare at schools and youth groups, Gullo said Paws Up for Pets is presented in sessions lasting 30 minutes to an hour over the course of a year.

Parts of the sessions can be serious, like the discussion Gullo was leading in the classroom, or more free-wheeling and fun, like the one in the van supervised by Avitia, the C.A.R.E.4Paws community outreach and youth program director.

“It’s really fun,” one girl said, as she hurried toward the school with a friend after having her heart rate and blood pressure checked inside the Mobile Spay Van. “I’ve really learned a lot, too.”

Children in the program are assigned certain tasks — like creating artwork or writing a poem, participating in a Power-Point presentation, learning all about proper animal care and taking a quiz — to complete over the course of six to eight weeks.

Once they fulfill their assignments, they earn badges like Animal Ambassador, Animal Advocate, Animal Hero and Animal Leader.

They also receive certificates, T-shirts and the Beany puppy, which is modeled after the real Puppy Davey and was created as a way to promote compassion for animals.

The story of Davey’s short life is horrific, so children in Paws Up for Pets are spared the most gruesome details. Still, it’s a powerful argument for animal rights.

Davey was a 5-month-old miniature pinscher puppy who was taken to a veterinary hospital in May 2014 by the girlfriend of the man who had repeatedly and mercilessly tortured him over a period of days, if not weeks.

He was suffering from broken bones, broken teeth, burns over 80 percent of his body, nerve damage and mutilated genitals.

Veterinarians, who renamed him Davey for the small hero of the David and Goliath parable, labored for two weeks trying to save him, but his injuries were so overwhelming, they eventually were forced to euthanize him.

It was a full year before the 19-year-old Chinese exchange student who tortured him was charged with two counts of felony animal abuse with an enhancement of using a deadly weapon — a barbecue ignition torch — to burn the puppy.

The man showed no remorse, but to avoid a jury trial in the airtight case against him, he pleaded guilty. He was facing 7½ years in state prison, yet the judge sentenced him to only a year in County Jail — he served only six months before he was deported to China.

The outrage sparked by his sentence led Gretchen Lief to create Davey’s Voice, a coalition of animal rights groups, and partly inspired the development of Paws Up for Pets.

Gullo said Lief had connections to Ty Inc., which makes Beanie Babies, and at her request the company agreed to create the Beany Puppy Davey to give a voice for the animals. Davey’s Voice donates them to Paws Up for Pets.

C.A.R.E.4Paws launched Paws Up for Pets in October 2016, and it was presented at schools and youth clubs in Santa Barbara before last fall, when it was brought to the Boys & Girls Club Buellton Unit, which consists of second- through sixth-grade students from Oak Valley Elementary School.

“It’s an awesome program,” said Jesse Gonzalez, Boys & Girls Club director of the Buellton Unit, who had seen it in operation in Santa Barbara. “I saw how the children really had a good time interacting with the animals.”

He said not only dogs but also cats and birds are used in the program, and the children take a field trip to the animal shelter.

“A lot of them think if you want a pet, you go to the pet shop,” Gonzalez said. “This shows them how they can adopt a pet from a shelter. It teaches them what kids and adults can do to keep animals from abuse.”

He noted it’s a good addition to the services provided by the Boys & Girls Club, which not only provides students with homework help but also computer safety training, sports, arts and crafts and various activities related to STEAM, which stands for the fields of science, technology, engineering, art and math.

Gullo said that as a result of funding from generous donors, C.A.R.E.4Paws is able to provide the program free of charge, but it will take a lot more donations to provide it at multiple locations

“We’re trying to get it countywide,” Gonzalez said of Paws Up for Pets. “Hopefully, we’ll get all our (Boys & Girls Club) sites onboard, because it really is an awesome program.

“It gives kids the opportunity to interact with pets socially,” he added, noting that can have other benefits for children.

“Sometimes you have children who are shy, separated from the group,” he said. “But with the animals there, they start interacting, even with other kids around.”