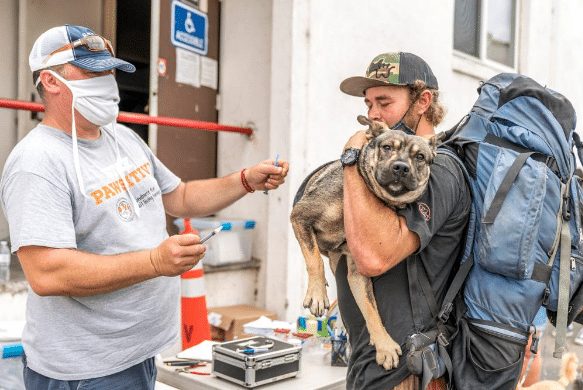 Since the start of the pandemic, a Central Coast nonprofit animal services organization is seeing a huge increase in demand for its services. With more people adopting from shelters, C.A.R.E. 4 Paws is working to make sure animals don’t end up back there.

People and pets were lined up in Santa Maria Wednesday outside at a mobile vet clinic. Inside is a team of technicians and a veterinarian, performing free spay and neuter operations as well as other services for pets.

“There’s not really a lot of options for affordable vet care,” said Isabelle Gullo, co-founder of C.A.R.E 4 Paws. “So we’ve stepped up in an unprecedented way.”

Gullo said with so many people working from home, adoptions of four-legged companions have sharply increased. But the pandemic has also brought financial hard times for so many.

“A lot of people who would traditionally go to the humane society or to a veterinarian cannot afford even the low-cost service,” Gullo said.

Sean Holmes is one of the new pet owners in line to neuter his puppy Edward. He said having a dog is helping him get through tough times.

“I’ve recently had a bunch of tragedies” Holmes said. “I lost my father a year ago this month and I lost my girlfriend in April—totally unexpected, and they were due to the same cancer. [Edward] has been there, just to keep my mind busy pretty much and keeping me out of a dark place.”

“[We] also offer pet food, supplies,” Gullo said. “We can help with temporary foster care if someone ends up in the hospital, for example.”

Gullo said if anyone has dog and cat food, as well as litter to donate, C.A.R.E. 4 Paws has drop-off locations throughout Santa Barbara County. It also accepts monetary donations through its website.

“The community really needs us right now and we don’t want to stop,” Gullo said. “So it’s important if people in the community who can help, can step in, because it takes all of us, it takes a village.”

The mobile pet clinic travels throughout Santa Barbara County four to five times a week, and accepts animals from anywhere.