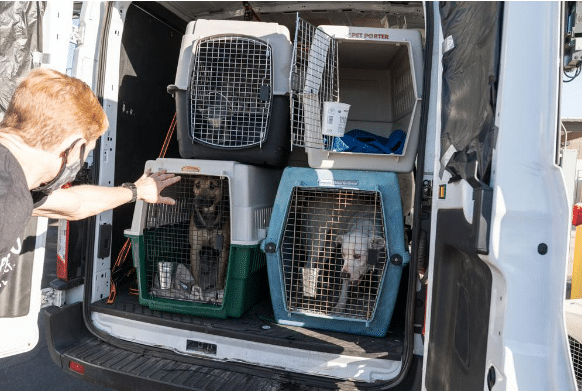 SBCAS said freezing temperatures, ice and snow—as well as power and water outages in the Lone Star State-—pushed thousands of owners to give their pets up to shelters.

As a result of this rapid influx of animals, shelters that already had dogs and cats were considering euthanizing them to help make room for the new residents.

However, thanks to a major collaboration between animal organizations, a goal was set to save these shelter animals’ lives by safely transporting 1,000 of them to open shelters in other states.

As a result, 22 lucky dogs and one cat were transported from El Paso, Texas, to Santa Barbara on Saturday.

The dogs selected for this journey ranged between four and 70 pounds and are considered healthy and social.

“As a municipal shelter, it’s unusual for us to transfer in animals from other jurisdictions, but in times of disaster and crisis, our network of animal shelters work together to save as many animals as possible,” said SBCAS Director Angela Yates. “We are so grateful that we are in a position to offer these 22 dogs a new and loving life in Santa Barbara!”

The dogs were transported with help from C.A.R.E.4Paws, Shadow’s Fund and the Santa Barbara Animal Care Foundation.

El Paso Animal Services initially transported the dogs to Pima Animal Care Center in Tucson, Arizona, where the winter refugees were able to rest from their long day of travel.

Several volunteers from Santa Barbara County then made an 18-hour roundtrip drive to Arizona and back to bring the 22 dogs to their new home.

“Through this collaboration, we are able to provide these shelter pets a greater chance at a loving home and we can’t thank SBCAS enough for being a lifesaving partner,” said Ramon Herrera, Interim Director of El Paso Animal Services.

The dogs arrived at the Santa Barbara Shelter on Overpass Road around 7 p.m. Saturday evening where they were greeted by a team of staff and volunteers.

SBCAS said they walked the dogs around the play yards that night to help them stretch their legs and get used to their new surroundings.

All of the transported dogs will receive a vet exam before being placed up for adoption.

SBCAS said many of the dogs will be made immediately available. A special adoption event is being planned for Tuesday, March 9, otherwise dubbed “Texas Tuesday.”

Those interested in meeting and adopting one of these Texas dogs can fill out a special online application here.

The shelter said they will be hosting adoption appointments throughout the week until all of these Texas dogs find their new California homes.

For more information or to adopt a pet, click here.